Elders:
Beartail: Big dark brown tabby tom. Beartail is just about cute as a button, and everyone likes him - more for his willingness to do just about anything. They really don't like him at all, they only like his... 'busy' nature. Beartail's just a complete flirt. And sometimes... more. (Tom)
Goldenear: Gray tom with very small ears. Goldenear is a mysterious cat who likes secrets. He likes to run around, and race the wind, the feeling of the breeze in his fur. He loves to adventure around and scare others, making them afraid of him. He also loves to spy on others, jumping out and scaring them in the last moment. You could say he is like a pop-out at the end of the movie. (Tom)
Honeypelt: Small black and white tom. He is a fun cat to be around.  He can help you out in a situation if you need it. But he can be a bit dangerous when he is angry.  Not that he would hurt anyone for he is passive.  He will just make you feel bad but will regret it later.  He also loves to try new things and he is quite brave and also very smart. (Tom)
Shelleye: Pale gray she-cat. Shelleye is a true warrior princess. Although she takes pains about her appearance, she is not afraid to get dirty and do the work that needs to be done. (She-Cat)
Shinetail: Tortoiseshell she-cat. Shinetail is still a kit at heart but knows when to be serious. She tries to stay on the bright side of life and be optimistic. She loves to hunt and fight, but she always tries to find another option instead of fighting. If all else fails she will fight. She loves her clan with deep respect and will do anything for it. She will even die for her clan when it comes down to it. (She-Cat)
Shadowpelt: Gray tom. Shadowpelt is extremely curious, and will ask questions about everything. He's always off exploring, often forgetting about things that he was asked to do. He's a regular little gossip, and can't keep a secret to save his life. Along with this comes a very short temper; he'll blow up in your face about the tiniest of things. He's willing to just sit down and think, especially when the weather's nice. He actually loves the rain, and doesn't mind having to work in it as long as he's rewarded after. (Tom)
Palestorm: White she-cat with bi-colored eyes. She is very kind to young cats, and loves to play with kits. (She-Cat)
Brightear: Gray tom. As his name suggests, he is well... bright. Not only is he bright, he is kind as well. Once you befriend him, he will do anything for his friends and family. Even to his enemies he is not as cruel as some of his other Clanmates. Mate to Clawtail. (Tom)
Smokespider: Black she-cat. Smokespider is a very curious she-cat, that loves to run and play with the apprentices. She doesn't fight unless its a clan battle, and/or unless shes provoked. She loves kits and finds some toms very annoying... You will often find her snooping in the medicine cats den or playing innocent pranks on the elders. She is very persuasive, with a happy attitude. Her mood, though, depends on the situation. If the mood is relaxed then so is she, and if its sad or frightening, she is sad or frightened. Parents are Sleekstar and Stormfang, Littermate to Sweetwillow, Rockclaw, Crystalpaw, Bubblepaw, and Aspenpaw. (She-Cat)
_________________ 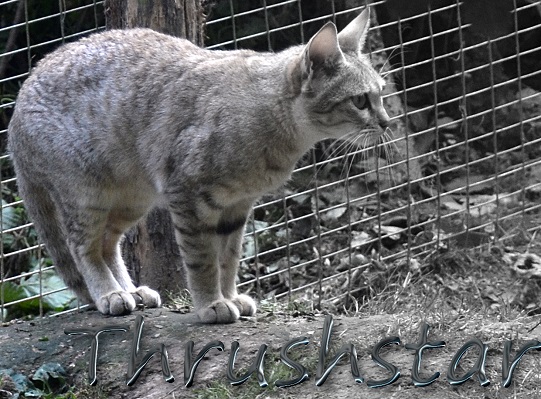