Senior Warriors:
Jayfoot: Dark ginger tabby tom. He is loyal and loves to swim. He does what his leader tells him now that he is older.  He enjoys spending time on his own a lot of the time. He doesn’t really want kits. He tries to avoid kits. He won’t mind training apprentice though he doesn’t like kits. He also loves hunting and hunts often as much as he can. Parents are Miststar and Emberstream, Littermate to Ivyfur, Jaggedpaw, and Lavenderwhisker. Mate to Cloudedfeather. (Tom)
Toadflower: Black and white tom. Toadflower might have MistClan’s average appearance; however his personality is larger than life. He is a mainly brave and outgoing cat, normally the one to jump out into battle. Most cats that have just met him would usually say nothing in the world would ever scare Toadflower! However, that isn’t true. His greatest fear, the dark. Parents are Milkstar and Reedcloud, Littermate to Blackfeather, Oceanwing, Rabbitswoop, Bristlestripe, and Dappleflight. Mate to Copperpelt. (Tom)
Dewstripe: Fawn tabby she-cat with a long tail. I am restless and cannot stand or sit still, but I am never afraid to say what I feel when I have to. Mate to Wetfrost. (She-Cat)
Dappleflight: Silver tabby tom. One of the many flaws in Dappleflight's personality is his candid spirit. He tends to keep secrets or problems to himself, and it literally has to be forced out of him. He never shares anything with others unless it's good, and the bad things just build up until he forces himself to tell someone. During these times, he's very depressed and sad about anything and everything; he never really wants to face the world and hides in his den. To go with these flaws, Dappleflight is very impatient and wants everything to happen quickly. He can't stand long in meetings, so often doesn't attend but listens from nearby, fidgeting. He also has a bit of a cranky side as well, and almost anything negative can set him off and make him angry. Parents are Milkstar and Reedcloud, Littermate to Toadflower, Blackfeather, Oceanwing, Rabbitswoop, and Bristlestripe. Mate to Emeraldface. (Tom)
Kindleflower: Brown tabby tom. Kindleflower dislikes many things, cats, twolegs, etc. If he was to be messed with, you can bet that he would try to attack. The only time the kitty is content is when he is asleep, or intrigued in another cat. There is really no way of communicating to the cat without him interrupting, or snapping loudly. You could describe him as a rude tom, but once you get to know the tom, he can be a delight to be with. Parents are Duskflight and Lavenderwhisker, Littermate to Cloudedfeather, Copperpelt, and Icyfur. Mate to Pearlsoot. (Tom)
Icyfur: White tom. Icyfur is a quiet sort of cat, a thinker. He likes to spend time thinking about the mysteries cats haven't solved, or pondering over random things his mind can't process well. He is a bit of a pacifist, because he can't stand much violence, but he will fight if he has to. If he is given the option though, he probably would avoid a skirmish at all costs. Just because Icyfur likes to spend time solving life's mysteries though, doesn't mean he isn't fun to have around! Parents are Duskflight and Lavenderwhisker, Littermate to Cloudedfeather, Copperpelt, and Kindleflower. Mate to Brambleripple. (Tom)
Dustleaf: Dark brown tabby tom. In short, Dustleaf is an awkward but cute little thing that often reminds others of a curious mouse. He doesn't try to be cool, and neither is he ambitious. In fact, he's a little shy, and really a very modest, humble cat. His concern is for others well-being and, while he doesn't always have the strength to back him up, he would stand against anything or anyone who tried to hurt someone he is close to. Parents are Wetfrost and Dewstripe. Mate to Reedcloud. (Tom)
Bamboofur: Silver spotted she-cat. Bamboofur is one of those strong, silent cats. She tends to keep to herself, slow to trust and quick to judge. To strangers, she appears rough-edged and self-absorbed. Once you get to know her- if she'll stick around you for that long, anyways- it becomes more clear that somewhere, deep beneath her hard exterior, Bamboofur is a compassionate cat. Though brittle, she is fiercely loyal. She resents change, though, and prefers things to be black and white. As a result, she isn't the biggest fan of deep, colorful emotions. Parents are Whitestar and Gingerclaw. Mate to Ivyfur. (She-Cat)
Whisperblossom: Silver tabby tom. This cat can only be described by having a...big personality. He is very loud and bossy, not to mention aggressive when the time calls for it. Parents are Duskflight and Lavenderwhisker. Mate to Berryflight. (Tom)
Mothpelt: Golden tabby tom. This tom is quite shy. You usually have to approach him in order for him to make any sort of conversation. He's not very outspoken, but when he does speak, it tends to be bold and heard by all. His eyes are shy but his words are bold. He is like the wind and the river. Quiet and wistful, yet quick and powerful. Parents are Wetfrost and Dewstripe, Littermate to Brambleripple, Rainash, Bloodshade, and Heatherfoot. Mate to Rivertail. (Tom) 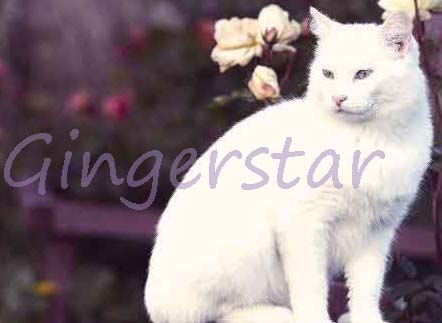