Senior Warriors:
Silentstripe: Sleek black and gray tabby tom. Silentstripe is quiet. He's fierce, and merciless. Sometimes his loyalty will cloud his vision of what is happening. Mate to Duskfoot. (Tom)
Bluewind: Blue tabby tom. Practical and a thinker. Strategic. Usually uses head more than heart. Can make sacrifices. Normally polite and serious. Mate to Spottedface. (Tom)
Darkheart: Ginger tom. Darkheart is an easygoing tom that never gets excited without good reason. He doesn't enjoy jumping into danger instead he always thinks everything through and makes sure everything is in order. Darkheart usually doesn't pay attention what other cats think about him and tries to never show off. He doesn't always seem very friendly because of his quietness but is actually a likeable cat once you get to know him. Darkheart is very protective and can become very hostile when something or someone he loves is threatened. He is very vicious in battle but always does whatever he can too prevent giving a cat serious injury resulting in death. Mate to Almondflower. (Tom)
Firefur: Thin brown tabby tom with a white chin and underbelly. I cannot hunt very well, but I never tell a lie. Mate to Bluefeather. (Tom)
Servalpelt: Dark brown tabby tom. Servalpelt is not one that enjoys talking. He prefers to stay away from others, not making friends with many. Whenever someone does make him angry, he will attack. His attack style, violent like a storm, always harsh on his opponents.  He is easily known for this kind of fighting style, trying his hardest to defeat his enemies. In conclusion, Servalpelt is rather silent, and much of an experienced fighter. Mate to Poisonfang. (Tom)
Sunberry: Black and white tom. Sunberry has a wild, raging temper. He can not laugh off a small insult: the way he is seen is important to him and he will challenge his tormenter. If small things make a small flame of anger, image what big things set off. A volcano of emotion erupts, and this is usually stopped with claws rather then words. When he gets upset, only the thing he is upset over matters - there is no point in reasoning with him. Mate to Electricbirch. (Tom)
Owlwing: Golden brown tabby tom. Owlwing is full of confidence and strength. (Tom)
Lilypelt: Very pale gray she-cat. In general, Lilypelt is one cat that you will always kind cracking jokes around others to get their attention mostly. She can come up with the wittiest things on the spot and will tend to say them and whatever comes to her mind before it can be filtered. Mate to Echostripe. (She-Cat)
Ripplewater: Pale ginger tom. Ripplewater is very smart. Parent is Almondflower, Littermate to Ravenfircone and Lilythunder. (Tom)
Ravenfircone: Black tom. Ravenfircone's priorities are always straight. If he's got things to do tomorrow, he organizes them in chronological order. It keeps him nice and tidy with his work. Parent is Almondflower, Littermate to Ripplewater and Lilythunder. (Tom)
Lilythunder: White tom. Lilythunder is in fact very tidy, both physically and mentally. He won't tolerate a speck of dust on his pelt, nor will he allow instructions to escape his mind. You see, Lilythunder is a very auditory learner. If you tell him to do something, he won't forget. Parent is Almondflower, Littermate to Ripplewater and Ravenfircone. (Tom)


Warriors:
Stormonion: Gray and white she-cat. Silent, sassy, and snappy. These are all things this she-cat can be called. She isn't the nicest cat, and she doesn't like anyone, other than her family. Parent is Brackentail. (She-Cat)
Brassleaf: Long-haired gray tom. Brassleaf is a hardworking cat. He always seems to be doing something. Almost never resting. He is a calculated creature. Everything he does is thought out ten steps ahead. He is cold. He feels nothing for anyone. He is heartless. He has not a care for age, gender, pregnant or not. He kills everyone with no regrets. He is emotionless. That's part of being a sociopath though. He is silent. He hardly speaks unless he sees a reason. Parents are Echostripe and Lilypelt, Littermate to Electricbirch. (Tom)
Sneezeleopard: Black and gray tabby tom. Quiet, rather stoic, and rather serious for his age. His mature exterior hides a warm, curious, and generally sweet interior. Somewhat excitable and appreciative of the world around him, but also more than a bit of a grouch. Parents are Silentstripe and Duskfoot, Littermate to Mallowmoon, Striperowan, Olivepaw, and Copperbrook. (Tom)
Wildfur: White she-cat. Wildfur is that cat who tries but can never seem to succeed with anything that she tries to accomplish. She'll try to climb a tree, and undoubtedly she'll probably fall. She'll try to catch a mouse and she'll probably end up tripping over a root. Even so, Wildfur is always trying her hardest and when other ridicule her for her 'immature behavior' it really does hurt her even though she tries to push it off as best as she can. Mate to Crookedtail. (She-Cat)
Mallowmoon: Black and gray tabby tom. Confident, bold, clever, daring, educated, loyal, passionate. Parents are Silentstripe and Duskfoot, Littermate to Sneezeleopard, Striperowan, Olivepaw, and Copperbrook. (Tom)
Striperowan: Large silver tabby she-cat. Loud, opinionated, logical. Parents are Silentstripe and Duskfoot, Littermate to Sneezeleopard, Mallowmoon, Olivepaw, and Copperbrook. (She-Cat)
Copperbrook: Pale ginger she-cat. Confident, bold, clever, daring, educated, loyal, passionate. Parents are Silentstripe and Duskfoot, Littermate to Sneezeleopard, Mallowmoon, Striperowan, and Olivepaw. (She-Cat)
Stonetooth: Gray tabby tom. A rather relaxed and friendly tom, Stonetooth is the calm in the storm. (Tom)
Spottedface: White tabby she-cat. Spottedface is very quiet, and non talkative. She will only talk when needed, or if she wants to. She doesn't like loud noises one bit, liking quietness more. Mate to Bluewind. (She-Cat)
Cloudfang: White she-cat. COMPLEX | AMBIVALENT | SIMPLE | RUTHLESS. Parents are Crookedtail and Wildfur, Littermate to Whitefur and Toadpaw. (She-Cat)
Sandstorm: Ginger she-cat. Talkative, genuine, decisive, romantic, vivacious. (She-Cat)
Almondflower: Pale ginger she-cat. I am a nice, cheerful, fun-loving cat, but most of the time I'm pretty shy. I am also fairly intelligent and always a step ahead of everyone. Most of the time you won't see my intelligence because I'm either daydreaming or thinking. Also, I'm fairly clumsy too. But when I put my mind to it, I can break away from my naive, shy shell and fight for what's right. Mate to Darkheart. (She-Cat)
Archeye: Gray tabby tom with black stripes. He's stoic and rarely shows any expression in any situation. (Tom)
Whitefur: White she-cat. SEDUCTRESS | BEAUTIFUL | ENTICING | LETHAL. Parents are Crookedtail and Wildfur, Littermate to Cloudfang and Toadpool. (She-Cat)
Bluefeather: Blue-pointed she-cat. She is very humble and kind. Bluefeather often thinks of others needs before herself, and many like her. Some probably won't like her because she is maybe to sweet and nice for them. She cares about everything, and will always give thanks to StarClan. Parent is Spottedface. Mate to Firefur. (She-Cat)
Poisonfang: Dark cream she-cat. Can never sit still especially when she's talking. Mate to Servalpelt. (She-Cat)
Toadpool: Black and white tom. VIGILANTE | CLEVER | PROTECTIVE. Parents are Crookedtail and Wildfur, Littermate to Cloudfang and Whitefur. (Tom) 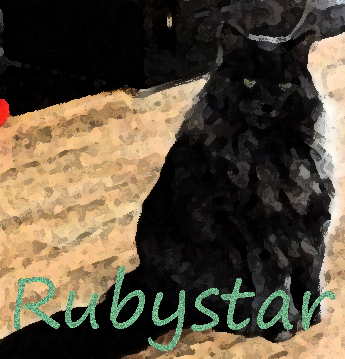 Personality: He's stoic and rarely shows any expression in any situation.