Elders:
Boulderfoot: Dark gray tabby tom. Boulderfoot is a very snotty cat, always walking around as if he was high and mighty and everyone was beneath him; if cats think otherwise... Well, he kills them, to put it simple. He is definitely all bite and no bark, instead of the other way around. Although, despite his willingness to kill cats, he can be- and often is- very nice to cats, at least if you're on his good side. (Tom)
Jayear: Black tabby tom. Jayear, although friendly and sensible, can be very sarcastic at times. This has earned him the weakness of being disliked by some of the other cats in his Clan, while others, however, find his occasional sarcasm funny and enlightening. The ones that understand him know he doesn’t mean to be snappy or the one that notices the obvious, and they play along with him, laughing it off if he puts on a smart aleck act with them. He can be a bit rude at times but this trait doesn’t exactly make him “mean”. (Tom)
Wolfwhisker: Light brown tabby tom. Wolfwhisker is extremely stubborn and doesn't take no for an answer. He's very quiet, not shy quiet, but reserved quiet. Wolfwhisker is not exactly anti-social, but then again he's not the prettiest social butterfly out there either. Mate to Sandytail. (Tom)
_________________ 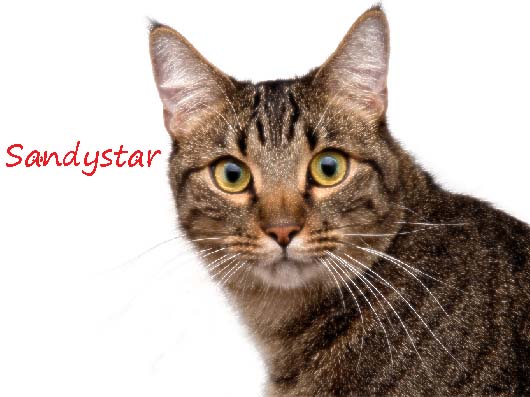