Senior Warriors:
Lilystripe: Golden male ocelot. Lilystripe is a cocktail of personality traits. His most obvious and distinguished trait is his bravery. (Male)
Startail: Golden male ocelot. In reality I am a blank slate. I can ever so easily, however, fake a personality just to get my way. I have learned to become a fake by testing it on various ocelots I knew. I can be the biggest sweetheart in the world and then in a heartbeat I can get nasty and dominant. (Male)
Whiteheart: Golden male ocelot. Whiteheart is obnoxiously well known for his pride of himself. He devours on praise and eats it up for his ever-increasing ego. With that comes the hotheadedness which can very easily occur over certain subjects. When he gets this ignited and frustrated, it will be pretty hard to convince him to back down or to even listen to those that go against his acts of sudden spite. Usually this stuff is forgotten the next day and he has already nearly forgotten the situation. What also rolls right in with his ego is his liking to show off every now and then. He loves to figure out ways to show off those muscles of his and sit, lean, or lay down a certain way. Maybe he'll even do it slow motion before you with those tentative, wondrous eyes fixed right after yours. He'll do anything to get something out of his target. A slight flinch, a tail curl, a shudder, nervous, shaky eyes, a twitch of the ear, the shuffling of paws; it all attracts him and tells him that he is doing his job well. (Male)
Thunderstripe: Golden male ocelot. A warm heart emanates from this warrior. He's forever proud of his pride and serves to his highest of regards. (Male)
Darkleaf: Golden male ocelot. Is normally very kind and understanding, but is very grumpy if he doesn't get enough sleep. Will do whatever his leader says and lets insults bounce right off him. (Male)
Ravenash: Golden male ocelot. If Ravenash can be described in one word, it would have to be the one he despises: cute. (Male)
Lightmoon: Golden female ocelot. Very sneaky and sly, good hunter, strong willed. Parents are Crowstar and Rainfur, Littermate to Ivypaw, Midnightplum, and Shatteredflight. (Female)
Midnightplum: Golden female ocelot. Unsocialable, not a good runner, is unable to help others. Parents are Crowstar and Rainfur, Littermate to Ivypaw, Lightmoon, and Shatteredflight. (Female)
Shatteredflight: Golden male ocelot. Kind, confident, supportive, sympathetic. Parents are Crowstar and Rainfur, Littermate to Ivypaw, Lightmoon, and Midnightplum. (Male)
Fallface: Golden female ocelot. Fallface is an adorabley inquisitive ocelot who is always sticking her nose in things it sometimes would be better not to. Other ocelot's feelings, for one. Subtly prying ocelots open to see what’s wrong, what they need help with is one of her lesser strengths, one that is less-acknowledged. (Female)
Goldenflower: Golden female ocelot. A fantastic ocelot to sit and share tongues with. Her attitude may scare some, but she will warm up to you once you get to know her more. (Female)
Loudflight: Golden female ocelot. While not a prick, she does drift into the immoral side of things. Parents are Crowstar and Fallface, Littermate to Russetwhisker, Falconwing, Birdivy, Nightingalefrost, and Nightmouse. (Female)
Falconwing: Golden male ocelot. His sense of morals is generic of liberal. Don’t murder, pillage, or rape your way through life, because it’s despicable and absolutely punishable. Parents are Crowstar and Fallface, Littermate to Russetwhisker, Loudflight, Birdivy, Nightingalefrost, and Nightmouse. (Male) 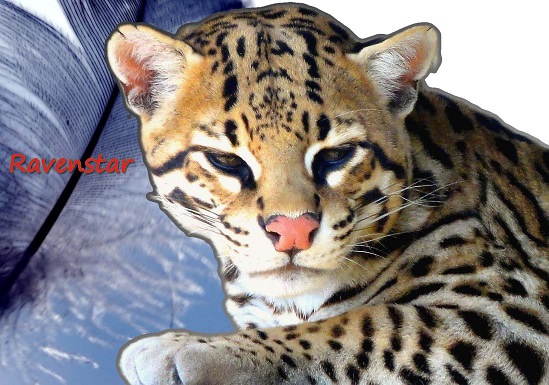