Elders:
Falleneagle: Dark brown tabby tom. Falleneagle is a stubborn tom with a mind of his own. He likes to do things his way but respects those above him and their orders. He gets angry easily and sometimes can be hard to calm down. He can be a pain in the tail when he gets irritated or wants to change the way something happens. He is definitely not the kind to back down from a challenge either. (Tom)
Sleepwind: Gray-brown she-cat. Although she never shows it, Sleepwind is extremely intelligent. She is cunning in her own way, and knows how to piss cats off without getting involved. She plays the classic villain-from-a-distance character. (She-Cat)
Smokebelly: Pale gray she-cat. Smokebelly is kind of shy. Once you get to know her, though, she never stops talking. (She-Cat)
Lilyfur: Dark gray tom. He is innocent and vulnerable.  He hasn't been exposed to the knowledge of an "enemy" yet.  Lilyfur has a strong mind and looks can be deceiving.  He may be innocent and vulnerable, but he is adventurous and brave. (Tom)
Emberwater: Gray and white she-cat.  She is a very elegant she-cat who is very kind. She is outgoing and bright. (She-Cat)
Sparkowl: Black tom. Sparkowl is a force not to be reckoned with; for he's one hell of a cat. He always has his guard on, and hates ones who throw pity parties for themselves. Mate to Crimsonhawk. (Tom)
Twonest: Dark gray tom. Twonest is kind and kit-like. His mischievous nature might get him into trouble, but he means no harm. Twonest likes to run and play with kits. He knows that growing up is hard, so he pushed the concept of mental, spiritual growing up away, and focuses on being young and free. Mate to Jayriver. (Tom)
Icewaterfall: Dark brown tabby tom. Icewaterfall is wise, charming, silly, smart, and brave beyond belief. Mate to Soulmountain. (Tom)
_________________ 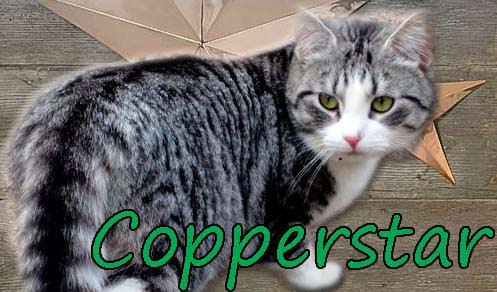