Elders:
Longcloud: Pale tabby tom with black stripes. It seems that there could be two or more cats occupying this tom's body, at the rate his personality shifts. His yearning for justice is so great, anything below that makes his upset. Stories of half-clans and betrayals give him jitters. (Tom)
Darkfur: Small dusky brown she-cat. Darkfur is rather easy to upset, which can make her arrogant and reckless. But again, her look on life changes and she becomes soft, kind, caring; She'll hear a yowl of agony and have an immense need to rush to their aid. These are only slight glitches in her true personality, though. Darkfur, at a glance, is a smart-mouthed, flirtatious, playful she-cat. She strives for her own excellence day in and day out. She's great at keeping thoughts and emotions inside, to keep a mask of cheer on all the time. (She-Cat)
Birdsong: Plump tabby tom. He sees himself as better than everyone else, or at least, more sensible, and the actions of his fellow clanmates never fail to amaze him in their immaturity. Because of this, Birdsong chooses to keep to himself, unable to find a single cat whom he can have a decent conversation with. He often feels that because of his size and strength, the only way he can earn respect is through his sharpness of mind, and thus he is very snappy, cynical and arrogant. He despises not being in control of a situation, and doesn't care much for manners. (Tom)
Talonstripe: Long-haired gray tom. Talonstripe is an impatient cat, and can't stand it when other cats moan at him. He's gruff, and if he had a mate and kits, they would be the only ones who could see round his temper. (Tom)
Blackfire: Dark brown tabby tom. He always wakes up early and goes to bed late. Mate to Swirlstripe. (Tom)
Bronzeflower: Golden brown tabby tom. He doesn't tend to think of what other cats want, and likes to grab all situations by the horns and put himself in charge. He's also rather hot-headed and will snap at any cat who irks him, even his own clan leader. The odd thing is, though, that he doesn't develop enemies over time, he just treats a cat how he wants to, depending on how they're making him feel at the moment. He tends to put the past behind him, disregarding it. This can cause some odd inbalances, for instance, him being nice to a cat that is still sour from him yelling their ear off the previous day. Mate to Smudgecloud. (Tom)
Tallclaw: Black and white she-cat. As a general rule of paw, she shuns newcomers and is very wary of them. However, an interest in a non-clan born cat has started to change her views and see the former kittypets and loners in a new light. Mate is Dangerfoot. (She-Cat)
Cherryleg: Long-limbed black tom. Usually very bouncy, Cherryleg is very adventurous and curious, never letting a secret escape from his piercing eyes. Is wise beyond his years, and often suggests things that are far too old for him to say normally. He is very well behaved, but is not afraid to go against anyone to do what he believes is right, even if it means going against his own Clan. Mate to Heavyflight. (Tom)
Mothtail: Sleek black tom with pale eyes. Mothtail is a regal tom who prefers to daydream than live things out, like in a battle, he could be a good fighter, but he could play it out in his imagination as he, an asset in battle. Mothtail is generally cheerful, but quite apprehensive, and sometimes quiet if large things are taking place. He is easily surprised, but not about some random, boring event. He loves to help other cats.  Mate to Tigertail. (Tom)
Thorncloud: Golden brown tabby tom. Thorncloud acts kind and caring, optimistic even. He barely ever gets angry. But inside, he's an evil, scheming furball. Mate to Foxheart. (Tom)
Weedblossom: Pale orange she-cat. Weedblossom is always a bit of a dreamer. She loves listening to stories, of massive winged cats made from stone, lizards that breath fire...Even if they aren't true, Weedblossom still half-wishes they were. Parents are Thorncloud and Foxheart, Littermate to Adderfrost, Robinwhisker, Swiftpelt, and Snowsun. (She-Cat)
Cougarfang: Brown tabby she-cat. Very kind. Also generous, loving, and respectful. A little bit of a rebel, and a magnificent fighter. Parents are Birchflower and Icebelly. (She-Cat)
Birdblaze: Golden tabby tom. Funny and caring, Birdblaze is good at making friends. He shows his flirty side to a lot of she-cats. He is clever at hunting and vicious in battle. He is very loyal. He shows eagerness in serving his Clan. Mate to Blossomclaw. (Tom)
_________________ 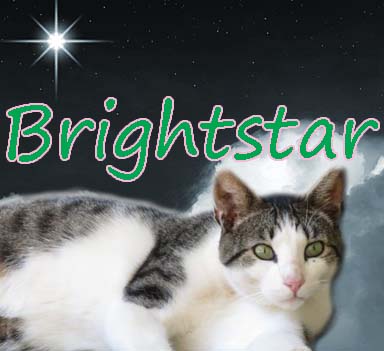