Elders:
Hickorytail: Pale golden tabby she-cat. I am a very respectful and proud cat. Not trying to sound high and mighty of myself of course. I'm not afraid to tell others what is on my mind. I can be very verbal and tries to solve conflicts in such way, but if needed, I would be more than happy to use my claws to settle any unwanted issues. (She-Cat)
Splashtail: Pale gray tabby tom with black stripes. Splashtail is very curious, as well as ambitious.  He enjoys adventure, and danger. (Tom)
Lionfoot: Dark gray tabby tom. Lionfoot is a quite playful warrior it's just his nature. He loves to joke around with other TigerClan cats, which makes him well known from everyone in the clan. But, he is not on the annoying side like some other cats in the clan that tease and just be a meanie. If you're in a bad mood he'll cheer you up in no time like no other cat would do. That's a nice thing, so nobody dislikes him and he has a very good spirit. But he can be shy around strangers from other clans, but if he knows them you will have quite a good time. (Tom)
Frostcloud: Very small silver tabby tom. He is playful and mischievous. He is very impatient which makes it hard for him to hunt well, if motivated enough he can be patient enough to do pretty much anything. He is both easily motivated and demotivated. He is extremely easy to offend and is very protective. (Tom)
Bumbleclaw: Pale gray she-cat with black stripes. Bumbleclaw seems at first to be a very dark and brooding type but once you get to know her she can be a quite good companion. Well in this case it depends on her mood as to whether she is easily angered and has a short temper. She can be patient and impatient, it depends on how she is feeling that day. Bumbleclaw is a caring and kind cat to those whom she holds close to her heart. Parent is Scarletcloud. (She-Cat)
Violetblaze: Reddish tabby tom. Violetblaze is friendly, and will make friends easily when it comes it to Gatherings. Not so much in his own Clan. There he is often by himself. He is a deep thinker, and sometimes, what comes out of his mouth surprises even him. Empathetic, he can be seen quietly talking talking to cats about what's going on, and how he thinks they could deal with it. His quiet ways are misunderstood by some, but to those of his Clanmates he's talked to he is a brilliant example of a friend, and in their eyes, is a caring, dutiful, understanding cat. Parents are Owlear and Morningfoot, Littermate to Ashwing, Coppernewt, Fangsong, and Emberclaw. Mate to Scarletcloud. (Tom)
_________________
StarClan: Blazekit
StarPride: Littlestar
TigerClan: Featherstar 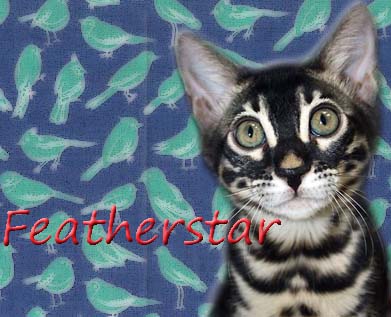