Senior Warriors:
Silentpelt: Dark brown tabby tom. Silentpelt is a kind tom, and never starts a fight. He is playful and graceful, always ready for anything. He is brave, and a little ambitious, but to serve his Clan. Mate to Lynxflight. (Tom)
Coppertail: Long-haired white tom. There's a lot of corners to the many edged tom, most of which are sharp and will probably leave you wounded and confused. Mate to Sparkwing. (Tom)
Skyclaw: Golden brown tabby tom. Skyclaw is a tom you DON'T want to mess with. He is always angry over something, and everyone's a enemy to him. Mate to Crimsontail. (Tom)
Duskfall: Light brown tabby tom. Duskfall has a few good and bad qualities each. He can be calm in certain situations, though this tranquil side of him depends on how serious the situation is. Not only is he calm, he is brave in dire times, such as in battle or a survival crisis. In addition to that, he is also loyal. Not doggedly loyal, but loyal enough to serve his clan with pride until he decides that it's time to move on. Though with every good personality trait, a bad one is bound to be there. Mate to Soulheart. (Tom)
Dreamwhisker: Gray and white tom. There's always that little need for revenge that sits in the back of his mind, building up until someone throws him over the edge. Dreamwhisker passes himself off as someone who's very calm, cool, and collected, this little cat has a boiling temper that's sure to show if someone pisses hm off enough. He usually chooses the physical violence route instead of using his words, seeing that he's not the most quick-witted feline in the forest. In fact, he always embarrasses himself when attempting to tell someone off. Mate to Whisperpetal. (Tom)
Whiteblaze: Golden tabby tom. This tom loves to talk, any conversation is a good conversation. Whiteblaze babbles on about life and everything else and he loves to reveal juicy gossip and secrets. (Tom)
Oceanleap: Reddish tabby tom. He is a very quiet and calm tom. Oceanleap doesn't get mad often, or even excited. The tom likes to be alone most of the time. When angered, all he will do is keep it inside of him. When saddened, he will do the same. (Tom)
Whitestep: Black and white tom. Whitestep has a friendly personality, and has made himself popular within his Clan.  He is always ready to play with the younger cats in the Clan, and always seems to be looking for a mate, even though he's just being friendly.  He may seem childish at times, but is always ready to protect his Clan.  He's very funny, but knows when to be serious. He knows when his Clan needs him and is always ready to give his life for them.  His Clan in the most important thing in the world in his mind. (Tom)
Ocelotstripe: Pale gray tom with black stripes. Just as there are many players on a team, many characteristics make up a personality. Some work very well together- determination and naïveté, organization to the point of OCD. Others are less agreeable, like a mix of loyalty and discontent with life. Just as internal conflict can plague any team, it can too befall a cat. (Tom) 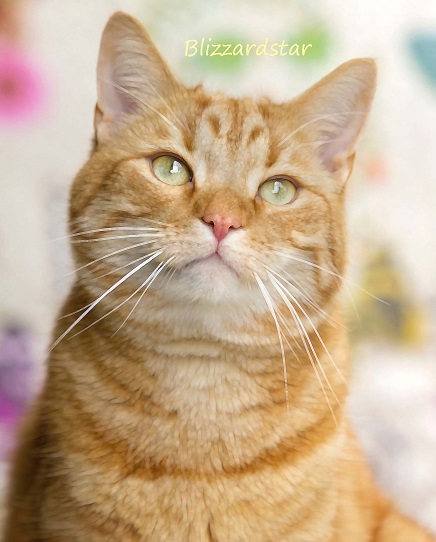